The Society of Smallness

This is the second essay featuring venues, artists, curators, and other actors participating in Mini-exhibtiothon ii. Rhoda Rosen’s Contemporary Cartography class at the School of the Art Institute of Chicago is debuting in Clutch Gallery and will be presenting a special performance at the Arts District December 8. 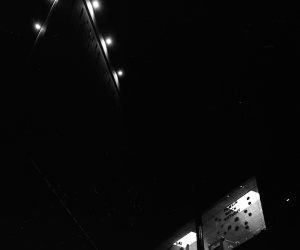 The map of the modern nation state marks a series of coordinates of inclusion and exclusion, of who will belong and who will not. These boundaries, in turn, come to rely for their policing on the mechanization of violence. The modern nation state, having practiced increasingly industrialized forms of warfare in the colonies, comes of age when it brings that violence back “home” during WW I, where an unprecedented slaughter, close to twenty million deaths, are recorded. Millions more are displaced. Later, following WW II, and the establishment of the League of Nations’ successor organization, the United Nations, it is three short years before its so-called temporary committee on refugees and stateless persons, becomes a permanent, fixed committee and the largest of them all.

By the beginning of the 21st Century, the global refugee crisis has become this century’s problem. It is no wonder then, that alongside the goal-oriented, frenetic pace of the global capitalist citizen and the panicked dash of the refugee, that walking differently – privately or in community – offers an individual a radical way to explore, resist, and reframe the spaces that engender and constitute us all.

41.8757° 87.6244° is an evolving collection of potential dérives—sets of instructions for walking, or “drifting,” in the city. These dérives, created, as gifts to the visitors of Clutch Gallery by a group of talented and thoughtful emerging artists, remain indebted to Guy Debord, the founder of psychogeography. Through a series of prompts, these young artists offer visitors the opportunity to think differently about walking, to walk differently through familiar spaces, to divest them of their function, their instrumentality, to be differently within them, to imagine brightly, to fashion an alternative ethics from within the narrow architectural frame offered to the global capitalist citizen. It has been a privilege to walk and to think with them this semester. As Rebecca Solnit has written, aptly, in Wanderlust, “the mind is also a landscape of sorts and walking is one way to traverse it.”

Rhoda Rosen is an art historian and curator, currently serving as adjunct associate professor at the School of the Art Institute, Chicago. She serves on the Advisory Council of the European Shoah Legacy Institute, incorporated by the Ministry of Foreign Affairs of the Czech Republic on January 20, 2010 as a follow-up to the Terezin Declaration endorsed by representatives of 47 states. Founded, in part, to seek systemic solutions on an international level leading to restitution of immovable property, art, Judaica and Jewish cultural assets stolen by the Nazis. Rosen is also a Research Associate in the Research Centre, Visual Identities in Art and Design (VIAD) at the University of Johannesburg, South Africa. She earned her PhD from the University of Illinois in Chicago; her MA and BA from the University of the Witwatersrand, Johannesburg, South Africa.